We had a great team in town for the fourth week of session. Another PBA member was designated as the Law Enforcement Officer of the Day in Florida House of Representatives. Both chambers released budget proposals. The Anti-Riot Act passed the Florida House. All in all this week was active for the PBA team. As always, I hope everyone is staying safe. Please read through this brief summary.

One of Tampa’s Finest 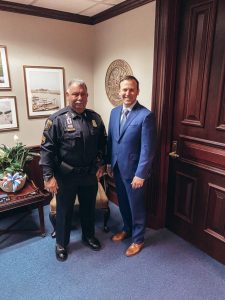 The Florida House of Representatives designated Tampa Police Department’s Senior Sergeant Ed Croissant as the Law Enforcement Officer of the Day on Friday, March 26th. Sgt. Croissant was able to watch the Florida House debate and pass HB 1, the Anti-Riot Act, from the House floor.

Sgt. Croissant has been a Tampa Police Officer for 30 years. Ed has worked a variety of assignments to include uniform patrol, Community Oriented Policing and Street Anti-Crime. He has been a police instructor for over 20 years and is one of less than fifty officers within the Tampa Police Department designated as a Use of Force Instructor. He is an adjunct professor at Hillsborough Community College Ybor Campus, where he teaches the Homeland Security Program.

The Florida Senate and House of Representatives released their respective budget proposals this week. These proposals are very likely to change as the federal monies come down as part of the stimulus.

Quick hits from the budget proposals:

The Senate instructs each state agency to submit a pay compression proposal to assist the Legislature in implementing increases to the minimum wage. This is an interesting development which may help us address salary compression at our state agencies. Currently, pay raises for state employees are not included in the proposals. There are no changes to employee health insurance premiums and no increase to the employee contribution for the FRS.

The potential merger from sworn to civilian personnel at ABT is not in the budget proposals. Furthermore, we have been advised by the agency that this issue is no longer being pursued.

The State Law Enforcement Radio System is an issue at odds between the two chambers. The radio system is 20 years old and in desperate need of replacement. The main issue has been a dysfunctional procurement process by the Department of Management Services.

The Chambers are far apart on Florida Department of Corrections’ top priority – further conversion of prisons to the 8.5 (really 16.5) hour shifts. The Senate does not include this conversion plan in it’s proposal.

Both chambers are looking to conduct some level of prison consolidation. The PBA supports the concept of consolidating prisons which we believe will help to alleviate the staffing issues and cut down on the insane amount of hours Correctional Officers are working. We actually believe the Department should be pursuing consolidation instead of conversion to the 8.5 (16.5) hour shifts. Both plans will take into account proximity to other prisons before closing a facility. The potential monies saved by consolidation are slated to be used for salaries in both proposals.

These proposals are just a starting point for right now. As more money becomes available expect changes in the positive direction to the final budget deal which will not occur for at least one more month.

“Thank you” to several people this week

Thank you to Representative Jason Fischer for issuing a public statement about his concern with tactics by the state’s Chief Negotiator Mike Mattimore. Mr. Mattimore and DMS seem always to do as they please no matter what the rules/laws say and perhaps they have gone too far this time.

Thank you to Speaker Chris Sprowls for creating the pro-law enforcement atmosphere within the Florida House of Representatives.

Thank you to all of the following individuals who took part in the two days of House floor action on HB 1. PBA had a strong presence in the chamber gallery and on the House floor. Please join me in thanking the following PBA members who were sponsored guests of the Florida House of Representatives (you all represented us very well):

Can't wait to come back up there

A legal duty officer is available 24 hours a day, for duty-related legal needs. PBA provides an attorney to represent you at the scene of an on-duty shooting or serious injury.

Stay Abreast of the Latest News Pertaining to Your Industry! Sign up now for E-PBA by completing the form below.